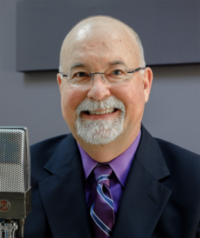 Dwight C. Douglas was born in Pittsburgh, PA and attended Point Park University where he studied Journalism and Communication.
He worked on the PBS TV show Mister Rogers Neighborhood as a film-telecine technician and worked at the American Broadcasting Companies as they were developing their FM properties.

Douglas moved to Atlanta to join the largest radio consulting firm in the world, Burkhart-Abrams & Associates, where he later became president and worked with media companies around the world. During that 25-year period, he was instrumental in recruiting and coaching high-profile radio morning shows, including Howard Stern.

He moved to New York in 2000 to be the vice president of marketing for a worldwide software company. In that same time, he produced a comedy web site. Throughout his career, he has written numerous screenplays, magazine articles and is the author of several books.

In 2017, Dwight Douglas retired from his marketing job so he could write full-time. He lives in Venice on Florida’s Gold Coast.